Wind and Photovoltaics produce some of the cleanest energy available. They are also the two most common technologies that are available to a residential or small commercial electrical user. Both technologies come with an inherent problem -- they produce clean power, but not necessarily when the customer needs it.

The solution to this problem is to store any energy that is produced in excess of the immediate demand, and there are two ways of storing it -- either in a battery bank, or in the power grid.

The most common battery technology is Lead Acid. Lead Acid batteries have a lifetime of approximately 10 years or 1000 charge-discharge cycles, whichever comes first. If cycled daily, they will wear out in approximately three years. Furthermore, only about 70% of the energy that goes into a battery when it is charged is returned when it is discharged. There is a direct cost associated with storing electrical power in batteries, both in efficiency and the lifecycle cost of the batteries. My rough calculations show that this cost is approximately the same as the cost of buying the equivalent energy from my power company instead -- not exactly conducive to the use of renewable energy!

The power grid as a storage device

Those photovoltaic installations that are also served by the power grid have another choice. In many states, California included, you can store your excess energy in the grid and draw it back when you need it. Net-metering refers to the billing process under which the utility charges you only for your net usage in a given period (in California, over a year). In other words, you get a full value credit for the power you store in the grid, and at the end of the period you pay only for any excess that you draw over your production.

Some people refer to this as "selling" power. This is a misnomer since you are never paid for the power that you "sell" to the power company. No matter how much power you produce under net-metering, at the end of the day you do not receive a check for any excess over your usage -- this excess becomes a gift to the utility. The term "bank" is more accurate than "sell". 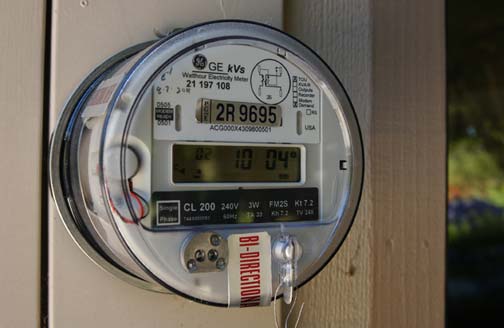 Our new bi-directional electric meter. Most older mechanical meters are also bi-directional, but Pacific Gas & Electric likes to replace them with the more accurate electronic meters.

The laws regarding net-metering differ in each state. California now has a very liberal law thanks to our champion of renewable energy, the then-Speaker pro tem of the California Assembly, Fred Keeley.

This page is supported by Adelman@Adelman.COM - Kenneth Adelman